The Universal Optical are the legendary Mansfield Square model F-770 worn in the 1950s by the Glamour icon James Dean.

A combination that gives this artifact a timeless aura, beyond fashions, within the myth. The fascination for vintage combined with the perfection of style and attention to detail enhance the uniqueness and originality of Universal Optical.

The history of the Universal Optical Company has deep roots in the twentieth century. A story that was born in the United States, exactly in Providence, Rhode Island, in 1911. A 100-year-old story that is back today, faithful to the characteristics of the time thanks to the passion, loyalty and respect for the original manufacturing processes.

Attention to detail, materials, shape and the ability to implement the simple and wonderful intuitions of the time that make the Universal Optical Mansfield Square F-770 an absolute and inimitable example of style.

The Mansfield Square F-770 went into production in the early 1940s becoming the flagship product of Universal Optical. They soon distinguished themselves as a synonym of elegance and some characters, which time has consecrated as icons of style, wore them.

Above all the movie star James Dean, but also Marlon Brando, John Fitzgerald Kennedy, Truman Capote and many others.

The Universal Optical Company was reborn from the passion of three young Italian entrepreneurs who bought the historic American brand in 2017, relaunching it through the undisputed elegance of Italian craftsmanship. Passion, quality of materials, abundance of details, aesthetic research, are just some of the inputs from which the rebirth of this splendid eyewear started.

All the steps of the artisanal production cycle, from tumbling to punching, from polishing to finishing, are carried out with the utmost care by skilled craftsmen, able to assemble the components necessary for each piece by hand, bringing in the present an exclusive product, produced entirely in Italy, according to the typical manufacturing processes of the most refined "Made in Italy".

The exceptional character of this amazing frame is among the most imitated ever but has never been duplicated exactly. All glasses are made with a glossy finish of cellulose acetate, respecting the history of Universal Optical, worked and finished by hand thus acquiring peculiar traits even in the imperceptible and authentic imperfections typical of the "handmade" manufacturing, thus giving by definition an aura of authenticity to the product.

The Rivet
Called Double Diamond Shield Rivet, is a hallmark of the Mansfield Square F-770. Slightly raised, enough to feel them under your fingers, they are tumbled by hand, one by one. Unmistakable.

The Hinge
The sturdiness of the 7-cylinder steel hinges, called 7 Barrel hinges, also hand-tumbled, gives solidity to the glasses. The left internal hinge, another distinctive feature of the Mansfield Square F-770, is engraved through the punching technique, with the measurements of the lenses and the bridge. Simply exemplary in its finish.

The Bridge
The bridge of the Mansfield Square F-770 was made according to the typical "lock" shape, thus enhancing the design of the model, but always respecting the original shape of the glasses. Inimitable excellence.

The Nose Pads
Another characteristic feature of the Mansfield Square F-770 are the "saddle-shaped" nose pads, worked by hand and engraved using a punching technique. The measurements of the lenses and the bridge are shown on the right nosepiece, while the Universal Optical brand has been engraved on the left one.
The attention to detail that makes the difference.

The package that contains the product is itself the product. This is why it must be studied and worked on consistently with what it contains. The packaging of the Mansfield Square F-770 consists of a rigid custom-made box of white canvas cardboard, glued by hand, on which the Universal Optical brand has been imprinted, in addition to the model name.

The glasses are contained in a smooth and flexible cardboard sachet, with a rubberized and brushed interior, according to the original model. Both boxes are rigorously drawn up in the descriptive tables by hand stamping, thus perpetuating the tradition.

All accompanied by a small white film on which the Universal Optical logo is imprinted. 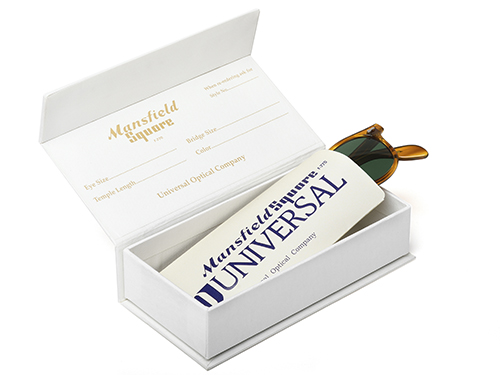